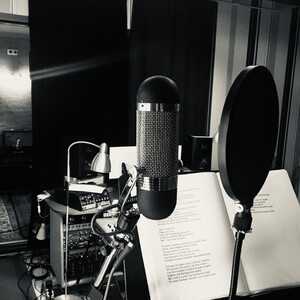 Iain Matthews and me have a new project: The Matthews Baartmans Conspiracy. We recorded an album last month titled Distant Chatter that we're very happy to be releasing this fall. Here's the liner notes that I wrote for the cd booklet.

Like all my family members, friends, musical collegues and ,well, everybody I guess I was still in a state of shock around April 2020. Personal circumstances made the threat of the virus even more scary and necessary to stay isolated. In the safe little comfort zone that luckily my house, garden and backyard studio provide it took me weeks to recharge and find any kind of musical inspiration, a strange and unusual phenomenon but it came back and then in many ways kept me sane.

Next to  working on some mixes for befriended acts in Studio Wild verband, I also picked up writing music again, songs and soundtrack material and I recorded some solo stuff of my own, playing whatever instrument I could make sound good.

Around that time I started getting mails from my good friend and longtime musical partner Iain Matthews. In the mails were lyrics. Good lyrics, urgent and heartfelt. About the loss of good friends, the fear of corona, racial issues.

They read like complete songs even though there was no melody or chord chart . And they came with Iain's request if I could put music to them.

We had worked that way a few times before and thus wrote songs together for Matthews Southern Comfort records that we still feel are amongst our best. So I had enough confidence to start working on the songs but it sure felt  like a new adventure. When I had something I thought sounded nice I made quick recordings on my phone and sent them over with a mix of excitement and uncertainty.

But it all came across well, Iain was enthousiastic. Grooves and words seemed to fit in a very natural way. Melodies came quick.

Oddly enough when a fair deal of work started filling my calendar again, hardly any gigs though but enough studio jobs to keep me on my feet, the busier I got  the more I wrote. Story of my life. No cancelling out the highs and lows for me like Iain describes in Writing Off The Blues.

Some of the songs from the lyrics Iain sent I had already recorded professionally like All My Friends (with my own vocals) and Hey Superman that MSC released as a single after Iain and the other bandmembers “flew in their home recorded keyboard and vocal parts” by mail. But most of them were still iphone demo's when we figured it was time to get together again for rehearsing early 2021 and we realized we had put together a complete album worth of good songs we felt were all ready to nail down and then let go.

We once again isolated ourselves from all the distant chatter and created a warm inspiring sonic home for our cherished songs. Surrounded ourselves with guitars, ribbon- and tube microphones, tambourines, tom toms and fast food and the music just poured out.

I believe we have recorded an album that absolutely had no other option than to be made.

Time's been a friend in the most uncommon way. Days on repeat leading to a very much welcomed side effect. Music's a healer for sure. Hope you'll experience that in a similar way listening to this record. Wish you all that's good in this world.
BJ Baartmans, June 2021"